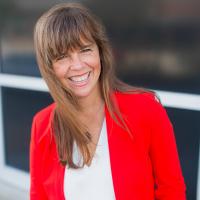 CARRIE IS A DEDICATED FINANCIAL AND TAX PROFESSIONAL AS WELL AS A MAINSTAY OF CORALVILLE/IOWA CITY AREA THEATRE.

Carrie earned her Bachelor of Science in theatre from Northwestern University in Evanston, Illinois, and has performed professionally as an actor and musician ever since.

Carrie has always loved numbers, and honed this skill while working for nearly a decade as the City Director Of Revenue Management for the Kimpton Group Seattle. She oversaw revenue management of three boutique four-star hotels in downtown Seattle: setting rates, increasing occupancy and using statistical analyses to maximize revenue.

She then found a way to combine her varied interests many years ago when she began preparing tax returns for, and explaining tax regulations to her actor friends. When she realized what an invaluable service this was, she took an extensive tax preparation education program and opened up shop. She has been preparing tax returns professionally for almost 15 years.

In the meantime, she also completed the Financial Planning education program and became a CERTIFIED FINANCIAL PLANNER™ professional in 2009. In 2013, she earned her Enrolled Agent (EA) designation, the highest credential the IRS awards to tax professionals and a designation recognizing her as one of "America's Tax Experts." Most recently, in 2016, Carrie became a Certified Divorce Financial Analyst® professional to better help many of her clients who were experiencing this significant life change.

Carrie was born in West Virginia and grew up in Des Moines, Iowa. She has lived in New York City, Seattle, Chicago, and has settled in Coralville, Iowa with her husband, Corey and two young sons, Waylon and Carter Birch. She has visited 50 states, 24 countries and 3 continents. She enjoys acoustic music, gardening, traveling, and being outside.