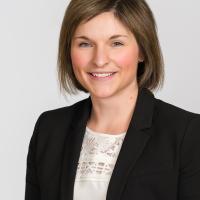 Stephanie J. Smith was born and raised in Rochester, New York. She relocated to Washington, D.C. to begin her undergraduate studies in 2001 and has lived in the Northern Virginia area ever since.

Ms. Smith began her studies at George Mason University School of Law in the fall of 2005. During law school, Ms. Smith was Vice President of the Women’s Law Association, a member of the Moot Court Board, the George Mason American Inn of Court, and the Trial Advocacy Association. She also participated in the legal clinic program as a judicial intern to the Honorable Teena D. Grodner and Thomas P. Mann and at the Fairfax County Juvenile & Domestic Relations General District Court. Ms. Smith earned her law degree from George Mason University School of Law in 2008.

Ms. Smith joined the firm of Cooper Ginsberg Gray as a law clerk in the summer of 2007 and became an associate of the firm in October of 2008. Ms. Smith is a dedicated advocate for each of her clients, providing honest advice and working diligently on each case to ensure her clients’ interests are protected.

Area(s) of Practice: Ms. Smith's practice focuses solely on family law matters including divorce; property division; custody, visitation, and support matters; post-divorce modification and enforcement matters; protective orders; and uncontested adoptions.
License(s): Ms. Smith is a member of the Virginia State Bar and the District of Columbia Bar, as well as the Virginia Bar Association, and Fairfax Bar Association and was selected as a 2014 Virginia Rising Star by Virginia Super Lawyers magazine.

Ms. Smith is trained in collaborative divorce. In 2014, Ms. Smith was appointed to serve on the Fifth District Disciplinary Committee of the Virginia State Bar. Ms. Smith also volunteers her time for various pro bono projects, including the “No Bills Night” and the "Attorney of the Day" program, and periodically teams up with colleague Rob Worster, III to assist local immigration attorneys with Special Immigration Juvenile Status cases on a pro bono basis.