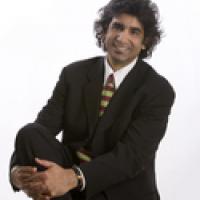 I am a lawyer - but that doesn't mean I want to see you in court. I believe that the best way to predict the future, is to create it.

With many years of experience before the Alberta courts, Karim can speak first hand of the advantages and disadvantages of the formal litigation process.

He's just as well versed in the alternatives, thanks to an interest first piqued on a Red Double Decker London Bus when he was 10 years old. He took his first formal mediation course on divorce mediation in 1993 and has developed his skills with ongoing training since that time including through the Program for Negotiation at the Harvard Law School in 2000 and 2002.

Karim has been an instructor for the Legal Education Society of Alberta, the Alberta Arbitration and Mediation Society, the Faculty of Law at the University of Alberta and the Canadian Condominium Institute.

Today, alternative dispute resolution including Mediation, Arbitration and Collaborative Law is the cornerstone of Karim's practice.

For further information about Karim and The Art and Science of Dispute Resolution go to his website at www.adrsolutions.ca.