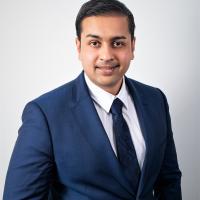 He is also involved in the sports and entertainment industry. Ronald is a certified Canadian Football League (CFL) player agent. He also previously served as general counsel for an NHL sports agency.

Ronald was born and raised in south Vancouver. He majored in criminology and earned a Bachelor of Arts degree at Simon Fraser University. Thereafter he completed his Juris Doctor in Law. After graduating from law school Ronald articled at Vertlieb Dosanjh. In 2014 Ronald formed Ronald Kumar Law Group.

Ronald is a skilled lawyer and is well respected among his clients and peers. He is a strong litigator that strives for excellence with every client matter. He treats each case with the utmost care and attention, and approaches all matters with an open mind with his goal being to deliver optimum results for his clients. He has successfully fought for and achieved favourable results for his clients through both settlement and Court.

In addition to his busy law practice, Ronald is also actively involved in both the legal community and his own community. He is an active member of the Trial Lawyers Association of B.C., Canadian Bar Association, South Asian Bar Association, and Law Society of B.C. Ronald is the founder of the Ronald Kumar Law Scholarship which is awarded annually to two graduating secondary students at John Oliver Secondary School (his alma mater).

He is an avid fundraiser for the B.C. Cancer Foundation, as well as for Canuck Place Children’s Hospice. He is a strong believer in mentoring youth and fostering community relationships and frequently participates in speaking events at schools and community events. Ronald plays ice-hockey, softball and golf, and also enjoys various water sports and fishing.