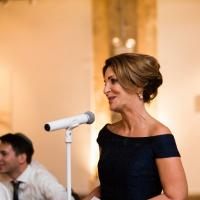 Rebecca Fischer is a skilled collaborative family law attorney focusing on family and children including devoting her practice to family law, probate, guardianship, trusts, special needs trusts, and estates. Ms. Fischer has spoken extensively throughout the United States on matters relating to Israel and needs within local Jewish communities.

Ms. Fischer graduated from the University of Redlands in 1979 with Honors, receiving a B.A. in Psychology. Ms. Fischer earned her law degree from Loyola Law School of Los Angeles in 1982, Deans List. She practiced family law since 1993 and for the past 15 years has particularly devoted herself to families with special needs children. Ms. Fischer commits her free time and professional expertise to numerous civic and philanthropic activities having served as President of Broward County Jewish National Fund (JNF), Chair of Makor, the JNF leadership division, President of Broward County AIPAC and a member of the AIPAC national board, President of the Florida Region, Leukemia Society of America, Executive Vice President of the Hillel Community Day School Board, member of the UJA National Board of Directors, Chair of the UJA Elder Care Task Force, Chair of the programming committee for the International Lion of Judah Conference, member of the UJA National Women’s Philanthropy Board and the UJA National Young Leadership Cabinet, member of the UJA national nominating committee, and president of the Jewish Federation of Broward County Women’s Division as well as having served on her Jewish Federation's Executive Board.

Currently she is the Chair of the JNF Arava Task Force, serves as a Presidential Advisor on the National Board of Directors of JNF, is the immediate past Chair of Kesher, a school for children with special needs, and recently spent five years serving on the Board of the Jewish Adoption and Foster Care Organization (JAFCO) Children’s Abilities Center. Ms. Fischer also served as a Guardian Ad Litem for the Broward County foster care system.

B.A. in Psychology with Honors 1979, University of Redlands